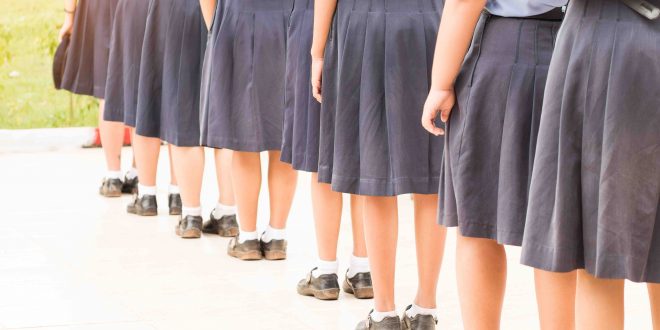 While the wearing of school uniforms has a long history across Australia, we are only just starting to talk about the expectations around what girls wear to school.

From discussion about the lack of change in girls uniforms over time, to questions about why schools need to divide students down gender lines at all, various groups are asking why girls are still required to wear skirts and dresses at schools.

For some parents, requiring girls to wear skirts and dresses to school is an outdated expectation that amounts to gender disadvantage and discrimination.

As research shows, skirts and dresses “restrict movement in real ways; wearers must negotiate how they sit, how they play, and how quickly they move. Skirt-wearing, consciously and unconsciously, imposes considerations of modesty and immodesty, in ways that trousers do not”. Wearing a skirt can also inhibit a girl’s ability to participate in sports.

A study conducted in one Australian primary school in 2012 found that girls did significantly less exercise over a two-week period when wearing a school dress than they did when wearing shorts.

Research by the Australian Bureau of Statistics shows that young women do significantly less physical activity than young men.

Reasons given for this include the fear of being judged or ridiculed, and the tension between wanting to appear feminine and attractive, and the sweaty, muscular image attached to active girls.

It can be argued that making girls wear skirts and dresses plays directly into this tension and their fears.

In an attempt to support girls exercising more, the Australian government launched a campaign in February 2016 called “Girls Make Your Move”.

The focus on girls is important, as regular physical activity and exercise is associated with improved school performance, a greater sense of personal responsibility and group cooperation, and reduced drug and alcohol consumption.

While expensive education and awareness campaigns may encourage more girls to engage in sport, a simple change to what they are required to wear to school could have a far greater impact.

While state education departments have the power to enforce uniform policies that are equitable, they largely leave it to individual schools.

However, these policy documents are often wordy and wishy-washy. This leaves schools with a lack of clarity about exactly what is required.

Principals and parents may be confused by the language used in policy documents, and can conclude that allowing flexibility for students who request “special circumstances” is enough.

When this occurs, it is highly likely that most school children will continue to wear the same uniform as the majority of their same-sex peers, as fitting in is crucially important for children and adolescents. This means girls will likely continue to wear skirts and dresses.

While principals may be open to allowing “special circumstances”, it could be argued that the right of girls to wear shorts to school needs to be a given, and not a privilege that needs to be argued for in each individual case.

Will legal challenges be the way forward?

The Victorian Equal Opportunity and Human Rights Commission identified school uniform policies as an area where schools could find themselves vulnerable to legal action.

The commission said that,

“requiring female students to wear dresses instead of pants may amount to direct discrimination”.

Despite this, a large number of schools continue to require girls to wear skirts and dresses.

To date, there has been no reported case of a school having to remove its requirements for girls to wear skirts and dresses as their only option in order to align with Education Department policy. But the desire for change is growing among parents.

A Melbourne mother recently created a petition on Change.org after her daughter was refused the right to wear trousers to her Catholic school, despite the fact that boys had this option. The petition called for the Victorian Department of Education to legislate that all schools must offer non-discriminatory gender uniform choices.

With 17,951 signatures supporting the petition, the issue is proving to be one that a number of parents think is important.

Will a school need to face legal action before all schools move to have uniform policies that allow girls to be as comfortable and free to move as the boys sitting beside them?