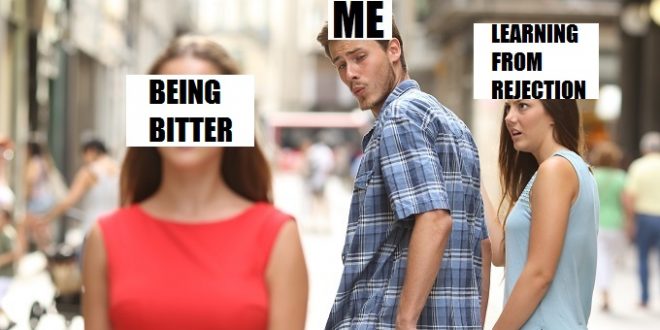 Once upon a time (in Queensland)… As an eager grade 12 student and zealous literary nerd I challenged Cambridge to hold me in its prestigious, academic bosom and carry me through hallowed halls to greatness, like a knight in shiny collegiate armour.

There’s a strange taboo around rejection and failure. We don’t really like to talk about our own failures because it is personal and often profoundly shameful, especially when we’ve worked extremely hard. Academic rejection can have an extra special sting.

It differs from the kind of rejection you might face from a book publisher, or a failed business venture, or in a social setting. It speaks directly to your ego, your intelligence, your work ethic. It’s a stone thrown at you from the tree of knowledge.

So, why am I choosing to share my rejection letter?

Because I don’t believe there should be a taboo, and I don’t think that academic rejection should sting. It should still be about the work. If you love the work, you will do it no matter what, wherever you can.

A brutal paragraph of negative feedback from one university isn’t going to stop you. It might, however, give you a new perspective, trigger a new idea, push you in a new direction or simply give you a new experience. Even if that experience amounts to nothing more than your first encounter with harsh criticism.

Thank you for your request for feedback on our decision not to offer you a place to study English Literature.  I fully understand that our decision will be a disappointment, and that you are entitled to ask for an explanation.

Cambridge applications are extremely competitive and I hope it will be possible to keep that point well in mind when considering this feedback. Every year we are sorry to find ourselves unable to offer places to excellent candidates.  This year particularly we had an exceptional number of very strong applicants.

Your academic record and predicted grades were very strong, particularly as your teachers rated your performance as strongest in the subjects which are most relevant. Your personal statement clearly communicated your enthusiasm for the subject, but there was relatively little evidence of additional reading.  Your submitted essays were thought to be impressive in its ambition and grappled with some very interesting concepts, but were rather confused and illogical in the approach taken, and many ideas were lacking in nuance. Our interviewers were impressed with your enthusiasm and clear interest in literature. Your answers were articulate, particularly when discussing literary study on a conceptual level. However, you struggled with the poetry readings and failed to engage critically with the material. When given new information or presented with new arguments, you sometimes failed to make appropriate adjustments to your own views, instead continuing to assert that your initial impressions were correct; you were rather rigid in your thinking and were often neither responsive nor reflective.

I hope this information is helpful and will reassure you that we do not take these decisions lightly.  We are required to consider all applicants together as a gathered field. I would like to thank you for expressing interest in Cambridge, and to wish you every success with applications to other institutions and with your future studies and career.

I accept this criticism. It felt brutal at the time in spite of its courteous wording.

I can remember the interviews quite vividly. They were a mixed bag. There were moments I felt impressive and moments I felt like I was missing the point of the question. At one stage, a female professor asked: ‘If I was a publisher and one of my authors had written something, then rewritten it – which version should I publish and why?’

How would you have answered that? It’s a great question.

My favourite moment was when two of the interviewers began quoting one of the essays I’d sent, asking questions about the choices I’d made. They asked me to read a poem aloud and discuss its meaning. I’d present an argument and then they’d ask me to provide examples that would oppose my original argument. It was challenging, engaging and exciting. I asked questions about pieces of theory I’d read.

At times, I was rigid in my thinking. At times, I wanted to prove I was right rather than contemplate being wrong. At times, I was unresponsive and confused. I can remember a moment of panic when I didn’t recognise a poem: my mind devolved into white noise and before I had time to read the first verse they asked what I thought.

Criticism is something we rarely want in lieu of praise. Even if it’s valid criticism. Even when it’s the criticism that provides momentum.

What I learned? Be your own prestige

After sending in my initial application to study English Literature at Cambridge, the response from most people was, ‘but it’s so competitive!’, ‘isn’t it really hard to get in?’, ‘don’t you have to be, like, really smart?’, or my personal favourite, ‘it’s impossible to get in though, so what’s the point in applying?’. I can still hear the voices that made these comments, eight years later. Why were they so widespread?

Perhaps it’s the fog of prestige that makes people delirious. They gasp and go all gooey and sometimes their faces wash with envy if they think you might get there first. But what comments like these make you reflect on, after you’ve been rejected, is whether the people making them were correct. You think, was I not competitive enough? Not smart enough? Was I deluded not to realise this was out of my reach? Finally, you think, what was the point in applying?

Well, it turns out there was a huge point. In the process of creating my application, I had to write a personal statement, I had to communicate with my teachers and family about what I wanted to study and how I needed to structure my assessment to achieve that goal.

I knew I’d have to send two examples of my work as part of my Cambridge application, so I made sure that I wrote at least two complex assignments in grade twelve that were in a relevant subject to my proposed degree and completed to a standard I thought was high enough for Cambridge professors to appreciate.

Thankfully, my school offered English Extension as a subject that year, so I had the opportunity to delve into complex theory and literary analysis.

Gratefully, my English teachers had more than a little faith in my ability and supported my ambition.

I worked harder because I had more reason. I had long-term academic goals. I was motivated to scale the high heavenly gates of a prestigious university, so I created work to help me scale those prestigious gates. I was persistent: I revised more drafts and asked more questions about assessment criteria. My assignments suddenly felt more important to me and more relevant to my life. I felt as though I had to put in ten times more effort.

When, after all this effort, I didn’t get into Cambridge, I realised that I didn’t actually mind. I’d still done all that work and it still felt worthwhile. It was still just as motivated and I felt my essays were just as ‘prestigious’ as before. The quality was still high and I hadn’t lost anything. In fact, I’d gained what Virginia Woolf called ‘industry’: the ability to produce high quality work in high volume at a relatively fast pace.

Chasing prestige can have a motivating influence, as it did for me back in high school. But once I turned that prestige inwards, focussed on reaching a level of work ethic I could be proud of rather than ‘the high heavenly gates of a prestigious university’, I realised that was much more motivating.

What I did next? Attend a different university

Ultimately, criticism is as criticism does. I choose to enjoy the momentum and I hope young people reading this will find it reassuring: if there’s an opportunity that appeals to you, apply! Pursue your interests. Find your passion. Rejection letters are proof of progress.

I love literary theory. Do you know how rare it is to meet other people who can say that? People who will hand me a poem and ask for my opinion? To be read by world experts in literary theory who’ve published textbooks and studied for decades and have read everything I’ve read (probably in multiple languages) is just an incredible privilege. It’s daunting, yes. Overwhelming, yes. But it’s an incredible privilege. Even when they rip it to shreds. Even better.

So I repeat what my favourite teachers used to say to me: apply, try your very best, get rejected if you must, and keep going.