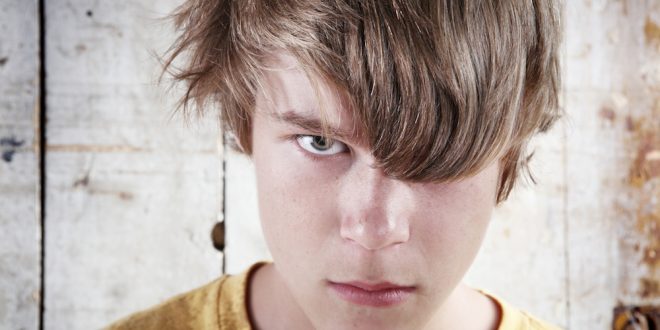 It seems that an epidemic of “weak parenting” has created a monster. The monster’s name? Prince Boofhead Syndrome (PBHS), and it is probably affecting teenage boys in your school.

Psychologist, Dr Michael Carr-Gregg, has been working with adolescents for three decades and he reports a proliferation of teenage boys presenting with aggressive, contemptuous and entitled demeanours. It was this trend that compelled Dr Carr-Gregg to write Prince Boofhead Syndrome with co-author, researcher and writer, Elly Robinson.

It seems that an epidemic of “weak parenting” has created a monster. The monster’s name? Prince Boofhead Syndrome (PBHS), and it is probably affecting teenage boys in your school. The clinical examples in the book ranged from disturbing to chilling, such as the mother trembling in the face of raw aggression when she informs her son he won’t be handed yet another latest model iPhone after losing his second one in a month.

While the name might lend itself to some tongue in cheek comments, the situation is no laughing matter, and Dr Carr-Gregg lays the blame squarely at the feet of parents. 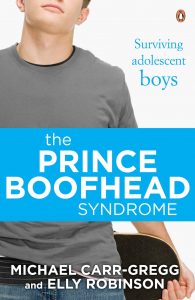 Along with co-author Elly Robinson, Dr Carr-Gregg has indicated that the ‘child-centred parenting movement’ has gone too far, disrupting necessary patterns of authority and boundary maintenance in the home.

Dr Carr-Gregg told ABC reporters in an August 2017 interview that parents reap what they sow. He says that if from an early age, parents don’t ask children to do anything around the house, allow them to speak disrespectfully, they are actually encouraging this contemptuous attitude towards the adults in the child’s life.

The PBHS ‘sufferer’ will also display misogynistic tendencies, according to Carr-Gregg, with mums copping the worst of it. He said, “many of us in psychology believe the same-sex parent is the most important. So, for boys, their template on how to be a man, how to relate to women is learnt through watching the father.”

“While boys are not as verbal or vitriolic as their sisters, they are physically stronger and can be terrifying in their anger, especially when it is directed towards their mothers, as it so often is,” Mr Carr-Gregg and Ms Robinson wrote in their book, Prince Boofhead Syndrome.

He says that if the father perpetrates these behaviours (that is aggression and/or contempt towards women), contempt for female family members will be mirrored in the son. Absent fathers leave a gap in male modelling, and when contact is limited, they can be reluctant to enforce boundaries – opting instead for what Carr-Gregg calls ‘the popularity contest’ that often ensues between separated parents, “leaving the child with no moral compass”. This is not to say that many single parent families are creating PBHs by any means – but the book quotes research arguing that the absence of any male role model is problematic.

The book urges parents to enforce boundaries, limit screen time so as to maximise mental and physical health, and to protect vital sleep time. It says fathers must engage any way they can, and that boys must be taught to contribute energy to the household and speak respectfully. There’s a special mention for the benefit of ‘delayed gratification’. Teachers will be painfully familiar with the challenge of managing students who have never had to wait for more than a few minutes without playing Where’s my Water on the iPad.

Parents have their role in managing Prince Boofhead, yet, for 30 hours per week, he is at school. What do schools need to know about dealing with these princes of darkness?

School News caught up with Dr Michael Carr-Gregg for advice and a suggested blueprint for referral and notification if teachers see the signs of this very modern condition.

Suzy Barry: Is this just a disease of ‘affluenza’ or are there cases of PBH in all socio-economic situations?

Dr Michael Carr-Gregg: While there is a predominance of the PBH syndrome in the upper and middle classes, I have heard many cases of the lazy, entitled, disrespectful boy amongst the battlers. It is largely a product of poor parenting and the Toorak and Vaucluse set do not hold a monopoly on that.

MCG: No, I think the peer group can compound and reinforce it. In adolescence, the desire to be with one’s age mates is a major driving force. The peer influence is very strong and if a young man sees his mate being allowed by his parents to treat them like a psychological doormat, then that can cause contagion – especially if the parent doesn’t call the behaviour when it first occurs.

SB: How can teachers support parents to work collaboratively to treat PBHS?

MCG: Teachers are often the go-to person for many exasperated parents. Providing them with good fact sheets, literature and reinforcing the message that parenting is not an exercise in martyrdom; all parents have a right to a quality of life; there is no shame in seeking professional guidance, and above all having a developmental perspective.

SB: Any advice for teachers who need to break it to parents that their son has a problem?

MCG: Teachers need to avoid sugar-coating the issue. If a student is behaving in an unacceptable manner then it has to be named. No parent will thank you for hiding the facts.

SB: Do they act out at school as well, or is it just the parents who suffer the brunt of the anger and disrespect?

MCG: Many will be quite delightful at school and reserve their aggression, frustration and anger for home. The disrespectful attitudes that PBH engages are generally not tolerated at school. If they are, the school needs to look at its respectful relationships policy.

SB: Have I correctly perceived that women are more targeted for the abuse of the PBH? You mention mothers – is it just because they are statistically home more or is it a misogynistic condition?

MCG: Both factors are important, often the misogynistic attitudes are inherited from the males, but it upsets me to think of the number of mothers who have told me that they feel frightened and intimidated in their own home. I also think this does not bode well for future relationships with members of the opposite sex or their own fathering trajectory.

MCG: It depends on the school; good school environments are ones in which female teachers feel safe to teach. If that is not the case, the school has a potential legal problem.

SB: How can schools nip the trajectory in the bud at an early age – say age 11 when high school starts?

MCG: The main role is the parent one, so parent education is crucial in the form of parent nights, fact sheets and resources like schooltv.me, which give parents skills, knowledge and strategies for intelligent authoritative parenting.

SB: What is the role of the guidance counsellor in this? Is it sufficient to process at school? What factors indicate that the student should be referred to a clinical psychologist?

MCG: The counsellor needs to assess and refer. Firstly, any referral should be made to a child and adolescent psychologist as they specialise in young people. As long as they are members of the Australian Psychological Society, they will be properly trained and qualified to help.

Second, the factors to look for are withdrawal from friends, poor sleep, change in appetite, decline in academic performance, feeling miserable most of the day most of the time, irritability and absence of hope.

SB: Do you have any anecdotal experience about the reaction of parents when schools raise concerns about a student?

MCG: Many initially get defensive, but with time come to a realisation that the school is just trying to help.

MCG: I think an education system that focuses solely on the ATAR and ignores social and emotional competencies, especially respectful relationships, contributes. I also believe that the lack of resilience we are seeing in young people can be fostered by schools providing too much support, not allowing boys to experience adversity.

SB: What else should school staff know about dealing with this phenomenon?

MCG: That it appears to be on the rise and that they need to invest in parent education, particularly around transition. Trying to fix the problem in year 10 when the psychological horse has bolted is often very hard.

Suzy Barry is a freelance education writer and the former editor of School News, Australia.
Previous Checks and balances vital for fair disability funding
Next How to start a ‘reading movement’ at your school