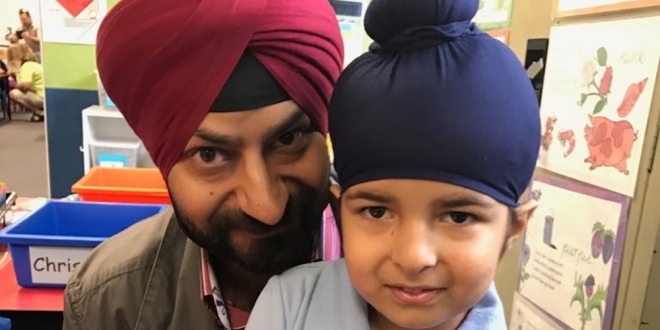 As this was not an option for the traditional Sikh family, Mr Arora took his concerns to the Victorian Civil and Administrative Tribunal (VCAT). School News caught up with Mr Arora for the details.

Mr Arora said the school had been selected based on the positive experiences of extended family, and religious tolerance had been anticipated: “I got no indication that school would be intolerant to Sikh religious practices and articles of faith,” the father said.

“While the school is a Christian-faith school, it admits students from other religions and also students with no religious affiliations. As the school had a few Sikh students enrolled, I anticipated that school would allow my son to wear his patka or turban in the school.”

The family was disappointed with the school’s response: “my son has been refused admission for an education of his choice because of his religious belief and practice. It’s great that the school admits students of different faiths but unfair that they do not allow students who practise their faith.”

“There are Sikhs who do not wear a turban or patka because they have chosen not to do so, even though they are mandated to have their unshorn hair covered at all times. Just as there are Muslim women who do not wear a hijab and there are Christians who do not attend Church every Sunday, there are the Sikhs who follow different levels of adherence to their faith,” Mr Arora noted.

“After the school rejection, my son had to be admitted to an alternative school, which we hadn’t considered in the first place. My son felt let down as he was not able to attend the school with his cousins.”

Mr Arora told School News that the community was largely supportive: “I had a talk with a number of Sidhak’s friends’ parents and almost all of them disagreed with the school’s decision to not enrol Sidhak.”

“When they learnt that I did not have legal representation; they assisted me and arranged pro bono representation by Herbert Smith Freehills, a top law firm in Australia,” Mr Arora told School News.

“Herbert Smith appointed a team of highly proficient solicitors headed by Ms.Trish Low and Mr. Anthony Wood. They worked together with outstanding barrister, Ms. Eliza Holt, to represent me in VCAT.”

While the school’s principal indicated they believed they were operating within the law, the victory has created a legal precedent. Commentators predict other schools will now be compelled to review their uniform policies following the ruling.

School News asked Mr Arora if he had been aware of the potential flow on effect of his decision to challenge Melton’s policy and if he was pleased with the far-reaching implications.

“I am very pleased with the VCAT decision and hope schools will be re-considering their uniform policies to make it more inclusive for students of different religions and cultural backgrounds.

“I believe having a common school uniform is important in promoting school identity and integration but is also essential to recognise that the policy should not hinder the practise of various cultures and faiths.”

He says part of this is that students “should be able to wear their significant religious symbols and articles of faith” if they so choose: “Students will learn religious or cultural harmony only if the school allows students of other religions to practice their beliefs,” he said.

So how has it all turned out? Sidhak started prep at Wedge Park Primary School in Melton West. The school has a uniform policy, yet the school has allowed Sidhak to wear patka, and other students to wear “articles of faith in the school without any concerns”.

As far as Melton Christian College goes? Mr Arora has indicated he is still open to enrolling his son who will continue to wear patka.

“There is a compulsory conference taking place next month before the tribunal passes it orders. I look forward to working with the school for a mutually suitable outcome,” Mr Arora concluded.

Suzy Barry is a freelance education writer and the former editor of School News, Australia.
Previous Optimum class seating plan, does it exist?
Next Birmingham says nothing to fear from phonics test