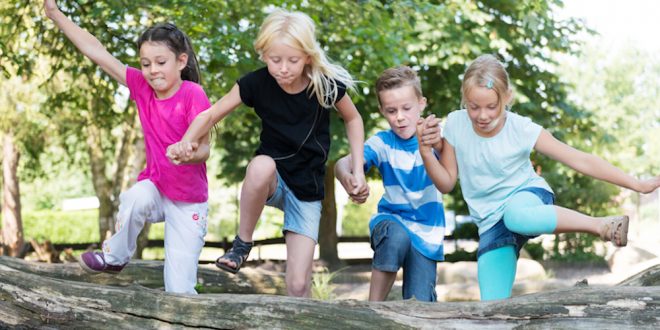 The school playground is a hive of social activity; it’s a mini world of lunchtime relationships, personal and group challenges, social movements and the odd political coup. It provides the context for learning functions, ranging from gross motor skills to negotiation and compassion. Thoughtful design marks the difference between cohesive learning and mayhem.

Professional playground designers will ask questions such as:

While most schools will separate equipment for younger and older children, smaller schools may have budgetary constraints that necessitate more innovation.

What do children really want? Why not engage senior students in a community use study as a civics assignment? Have them survey students for their ideal playground. The learning here is enough to justify the process, even if the winning playground design is a Ninjago-themed space shuttle that spits chocolate frogs into your hand whenever you successfully reach the top of the climbing frame.

The next stage might just have to be ‘the feasibility study’. Fantastical Willy Wonka type imaginings aside, students will likely issue their interviewers with some solid suggestions.  At least then the first stage of ‘user preference behaviour’ can be documented, before handing over the to the management board (the adults).

In 2016, The International Play Association released a discussion paper, titled ‘Children’s Right to Play and the Environment’, which promoted the importance of play, and advised on optimising play environments.  The authors defined play as “any behaviour, activity or process initiated, controlled and structured by children themselves; it takes place whenever and wherever opportunities arise”.

Much of a child’s school day is ‘teacher directed’, and break times are their chance to whimsically create activities and explore, guided by what they can see, touch, hear and smell. They are inspired by classmates, animals at the school, play equipment; and natural surroundings, such as flowers blooming, frogs croaking, or cicadas chirping. Children’s imaginations will do the rest – they need time, space, and a little suggestion.

A simple ship’s wheel can transform a wooden structure into a pirate ship and the garden into Treasure Island. Rope ladders have would-be-sailors climbing the riggings, while make-believe set-ups like a shopfront can keep kids in business for weeks.

According to the report, play is not all fun and games: “Playing is a particular way of engaging with the world; while playing, children can experience the vitality of a range of emotions, with less consequence than such emotions may bring in the ‘real’ world. This can give rise to positive feelings and pleasure, a sense that life is worth living for the time of playing. It contributes to peer attachments and attachment to place,” the report reads.

In a clinical report published by The American Academy of Pediatrics, titled ‘The Importance of Play in Promoting Healthy Child Development and Maintaining Strong Parent-Child Bonds’, Kenneth R. Ginsburg, MD, MSEd, argued that even children born into privilege, (free from child labour, poverty or conflict), are still not enjoying full access to a basic human right for children; free play.

He wrote: “Social-emotional learning is best integrated with academic learning; it is concerning if some of the forces that enhance children’s ability to learn are elevated at the expense of others. Play and unscheduled time that allow for peer interactions are important components of social-emotional learning.”

Dr Elizabeth K Nesbit of Trent University in Canada has been researching the effects of ‘nature connectedness’ and has found that, just like the Japanese custom of ‘forest bathing’, wellbeing can be improved through contact with elements of nature.

A study published in journal Frontiers in Psychology found compelling indications that “nature can be beneficial, for example leading to improvements in mood, cognition, and health”.

The incorporation of natural elements might just be a balm for the soul of a 21st century child, bombarded by flashing billboards and technicolour entertainment.

As the IPA report authors state, “the lure children feel to playing outdoors in natural spaces or wild environments is one of play’s many facets”.

“A growing body of research has found that  daily exposure to natural environments while playing has a positive effect,” the report continued.

While the report is international, and speaks to the child’s right to play from the context of a world where poverty is rampant, and child labour is more prevalent than many care to admit, the findings are applicable here in our schools.

Students deserve a space to be children; to practise their imaginative ideation and social learning in the sort of amorphous expanse that used to characterise the school holidays in generations past.  As Albert Einstein said, “imagination is more important than knowledge. For knowledge is limited to all we now know and understand, while imagination embraces the entire world, and all there ever will be to know and understand”.

Suzy Barry is a freelance education writer and the former editor of School News, Australia.
Previous Something to get STEAMed up about
Next First high-rise school to open in virtual world