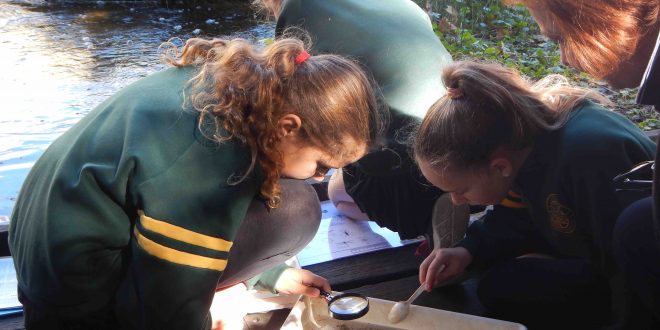 In a search for some of the most sustainable schools in Australia, School News trawlers happened upon a catch of significant suitability. Coolbinia Primary School has the wholistic sense of sustainability down to a fine art.

In July 2015, perthnow.com.au called Coolbinia Primary School “the greenest school in Australia”. The school’s cross curricular coach, Dr Elaine Lewis works to incorporate the Western Australian Curriculum Outline’s cross curriculum priorities, in the context of the school’s commitment to the students’ education, their community, and their world.

The ‘greenest school’ title was awarded after their climate change project won them the UN Association of Australia’s 2015 Environmental School award, but the school’s green credentials don’t stop there.

Achievements include a 360 tonne reduction in greenhouse gas emissions, high level achievements as a Waste Wise school, recognition as a ‘champion’ Waterwise school and a ‘double platinum’ TravelSmart school award.

Over 130 tonnes of carbon reduction has been achieved, and biodiversity enhanced, by tree planting in salinity affected areas and local bushland. “At the start of October 2016, our solar power system had generated 76979kWh and saved 72621kg of CO2 from being released into the atmosphere since 13 September 2012”, Dr Lewis concluded.

During the 1960s, renowned naturalist and environmental conservationist, Harry Butler used to take Coolbinia students on guided walks through the school bushland area. Famous for popular 1976 to 1981 ABC television series In the Wild, Harry Butler died of cancer, aged 85 in December 2015. Dr Lewis was proud of her students’ commitment to their display on butterflies in a commemorative wildlife show. The school community has even written their own butterfly book, with illustrations created by the children under the guidance of local Noongar artists. 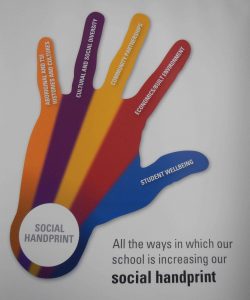 But Coolbinia also acknowledges the importance of the ‘social handprint’. Born from the Australian Sustainable Schools Initiative (AuSSI) along with better-known concept; ‘eco footprint’, the social handprint arose from recognition of “student wellbeing as a critical part of sustainability”. Community partnerships are also an intrinsic element of the social handprint concept. “It’s local action”, Dr Lewis clarified. “By working with other community groups, we can enhance the educational experience for the children and help them be empowered to make a positive impact in the world, environmentally and in terms of social justice.”

Within the context of social and cultural diversity, Dr Lewis emphasised that “intercultural understanding is vital so all groups feel empowered, so that we can work in partnership in reducing our eco footprint”. Dr Lewis is mindful of the human component of behaviour change, “because that’s how you facilitate change to happen”.

The social handprint concept is depicted using a hand with each element of the social responsibility matrix represented on an individual finger.

ACARA’s website advised, “cross-curriculum priorities are embedded in all learning areas. They will have a strong but varying presence depending on their relevance to the learning areas”.

The school’s work supporting Solar Sister satisfies several priorities, and fingers of the social handprint and eco footprint simultaneously.  The international organisation states that it works to “eradicate energy poverty by empowering women with economic opportunity”.

Students raise funds through assembly stalls and fundraising days, to enable Solar Sister to replace polluting kerosene lanterns in developing nations with solar lanterns. This provides a safe and free way to light their homes at night for study or to support themselves through enterprise.

Dr Lewis explained that the projects allow the children to effect global change, while acting locally. “We’re extending our impact, by taking these and other actions, we are nurturing young global citizens.”

Not all schools are lucky enough to have a cross curricular coach, but essentially, Dr Lewis was the driving force, initially applying for grants to fund her own position. Once the programs were in place, the school leadership team acknowledged her contribution by creating a funded position.

Dr Lewis urged that for cross-curriculum programs to be successful, they must be “embedded into the curriculum in different learning areas and be a part of the school’s business plan and operational plan” and “not just an add-on”.

In the school’s cooking program, students satisfy science learning objectives by exploring the chemical changes caused by heating, while using produce they have grown in their garden, and these students are not just digging around doing a bit of gardening out there…

“They will go outside and check the pH of the soil as part of their science learning objectives”.

Dr Lewis’ satisfaction with the effectiveness of that plan is apparent. “It has to be a case of ‘how can we fit that logically?’ and ‘what meaningful action can the students take?’”, she galvanized.

Having everyone at school behind it is vital. “It all comes back to the vision and planning”, was Dr Lewis’ concise counsel. A self-confessed “fan of whole system thinking”, she added, “it’s the working together, the recognising of different people’s strengths”.

So what effect does this focus have on children’s sense of citizenship? Dr Lewis had both quantitative and qualitative results to share. Surveys have shown gardening program children more prepared to eat vegetables they have grown, “and even setting up vege gardens at home”.

Qualitatively, Dr Lewis reports a greater willingness for service from the students. “Year three children were worried about the orangutans in the world, saying ‘I want to raise some money, and send it to the Perth Zoo Orangutan project”. Within her role as cross curricular coach, she facilitates this and helps them plan, but they do all the work. “It’s them taking the initiative to make a difference”.

Something is certainly making a difference, and it seems to begin with Dr Elaine Lewis, whose passion is palpable, as her pride almost explodes from the telephone, at the social and ecological stewardship of the young scholars of Coolbinia Primary School. Perhaps all schools need a Dr Lewis.

Suzy Barry is a freelance education writer and the former editor of School News, Australia.
Previous Victoria to raise the ATAR bar for teachers
Next New phonics test pointless: a waste of precious money buying it from England